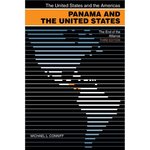 Panama and the United States: The End of the Alliance.

Panama and the United States chronicles over 180 years of relations between the two countries, following the former’s independence from Spain in 1821. It covers major projects, like the Panama railroad, the French canal episode, the U.S. canal, as well as principal treaties and their negotiations. It goes beyond diplomacy, however, to survey the breadth of relations, including economic, political, cultural, demographic, and intellectual. The Panama Canal dominates the narrative, to be sure, spanning the 20th century, yet since 1999 that waterway has been managed successfully by Panama, as detailed in a new concluding chapter. This has been called one of the best surveys of Panama’s history in English.

Conniff, Michael, "Panama and the United States: The End of the Alliance." (2012). Books by SJSU Authors. Book 24.
https://scholarworks.sjsu.edu/faculty_books/24