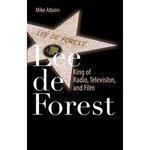 Yale Ph.D. Lee de Forest took 19th Century science and turned it into the electronic entertainment media of the 20th Century. In 1907 he patented his signature invention, the vacuum tube, to be a transmitter, receiver and amplifier of sound. He experimented with the broadcast of music and started several radio stations. Beginning in 1918 he patented a system of writing sound on motion picture film for synchronized talking pictures. His tube was the key as it allowed amplification of sound using loudspeakers and made it possible for audiences to experience both radio and talking pictures. He supplied the missing voice to the motion picture for which he received an Oscar.