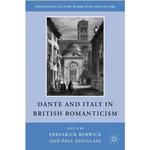 Dante and Italy in British Romanticism

This volume, which brings together several of the most authoritative scholars in the field, represents a landmark in the study of Anglo-Italian literary and cultural relations in the Romantic period. It succeeds brilliantly … and throws much-needed light on a crucial period of political and social transformation in Italy, as seen from the critical but sympathetic viewpoint of contemporary British intellectuals, reaffirming the centrality of Dante’s role in the formation and interpretation of Italy’s late and contradictory identity as a nation.