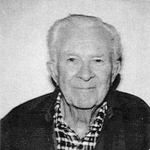 Vessel and Applegarth, Experiences with Living Things. A Laboratory Manual and Field Guide for the Study of Our Natural Environment.

During the last year that I taught school in Redlands (1939), I made, as one of my extracurricular activities, an hour long (1600') colored movie that was a cross section of the teaching activities in all grades from Kindergarten through High School. This movie was shown at the California State Superintendents Convention two successive years.

In the years that I taught at SJSU, I taught 60 or more weeks in the Field Studies Program. One year I took colored movies for a 60 minute publicity show to promote this program in various communities.

In 1941, I attended the Naturalist Training School in Yosemite Park for U.S. National Park Rangers, after which I accepted a summer ranger job in Tuolumne Meadows. This job, however, was of short duration as I was asked to join the U.S. Army's Flight Training School in Santa Ana. My assignment was to be a civilian instructor teaching Meteorology and Physics. In that year, I was inducted into the Army as a buck private but soon rose to Staff Sergeant.

I was generously released from the Army to accept a commission in the U.S. Navy. After naval training, I served during part of WWII in Central America, initially as an Aerial Gunnery Instructor in the Panama Canal Zone, then, in turn, as a Communications Officer, a Briefing Officer, and finally as an Executive Officer in Nicaragua.

I was next transferred to Florida to be a Recognition Training Officer for a Naval Air Transport Squadron. From Florida I was eventually sent to the Philippines, where I was promoted to lieutenant Commander.

When the war ended, I returned to my family in Palo Alto and completed work at Stanford for the Ph.D. This I received in 1951. For income, I sold real estate and worked four summers doing reconnaissance and field mapping for the U.S. Forest Service.